The City of Robinson came into existence after brothers John and Levi Robinson established homesteads in the area in the early 1850s. The original Robinson home was built on land that later became the J.W. Mann farm. To encourage the growth of the village, in 1856, the brothers surveyed 171 acres of land and marked off forty-two, four-acre lots for other homesteaders. The Robinson's sponsored the settlement's first school in 1860, when they hired a private tutor for their children. The teacher, Mr. Moore, lived with the Robinson family.

In 1885, Robinson had a population of 600 that supported three cotton gins, two churches, three general stores, and a school. J.W. McKee and Sons, a broom factory, was also in operation. In 1888, Rev. John Strauss founded the Robinson Academy. By the late 1890s, the population had dropped to 300 despite the continued operation of the broom factory.

Known originally as Robinsonville, the city was incorporated in 1955 under the name of Robinson. In 1958, its site comprised of twelve square miles adjacent to Waco. Business owners organized the Chamber of Commerce in 1957. By 1960, the population had grown to 2:110. Residents numbered close to 7,000 in 1980. In 1982, the town had its own water system fed by seven artesian wells, as well as its own sewer system. The same year, Robinson had evolved to include a volunteer fire department, a police department, and a unit of the Texas Department of Public Safety. In 1990, the city was primarily residential and had a population of 7,111 residents and numerous small businesses. The present Home Rule form of government was adopted in 1999. In 2000, the population reached 7,845 (Robinson Chamber of Commerce, Robinson, Texas: A Natural for Residential, Business, and Small Industry (1959). In 2010, the population reached 10,509 people due to active growth over the preceding decade.

Although many Robinson residents have lived in the City for decades, history reveals that we are all merely newcomers. The Central Texas region, including Robinson and McLennan County, has supported human habitation for several thousand years.

Archaeological evidence suggests that hunting and gathering peoples established themselves in the area as early as 11,000 years ago. Some of these may have been ancestors of the Tonkawa Indians, who appear to have been native to the region. The Wichita groups moved south from Oklahoma around 1700 and by the early 1800s, some Caddo and Delaware Indians were in the area as well.

McLennan County was established in 1850 with Waco Village as its county seat. Within a couple of years, the local Indians were moved. 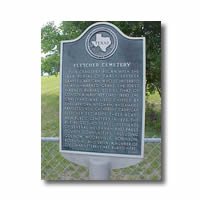